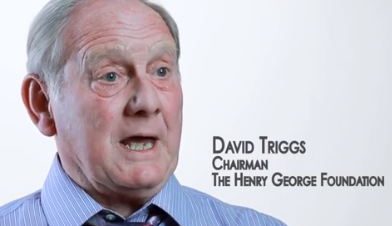 David Triggs is travelling up from London to hold an Economics workshop at Newlands House.

The day will be devoted to an examination of the philosophical background, and practical implications of propositions made in a new 30 minute film ‘The Taxing Question of Land’.

The School, along with the Henry George Foundation of Great Britain and others, commissioned the film and David Triggs provided much of the background material that is illustrated in it.

Following an introduction and the showing of the film David will provide an initial response to questions, comments and observations from the audience in relation to the changes in fiscal (tax) policy that are advocated in the film.

In later sessions David will discuss these and other problems including employment, housing, debt, trade, public services, monopoly and money.

He will relate these issues to the fundamental principles of political economy that Henry George identified and which were such and inspiration to the founders of the School of Philosophy and Economic Science.

These principles will include consideration of:

The day should provide much food for thought and an interesting challenge for those who would seek to secure a social environment that is more conducive to the physical, mental and spiritual welfare of people and the planet than currently seems in prospect.

For more than forty years he specialised in water and environmental management working throughout the UK and world wide – mainly in developing countries on both small village projects and mega projects in capital cities.

A member of the School of Philosophy and Economic Science in London for more than fifty years and inspired by the ideas of Henry George. David has studied and taught Political Economy for a similar period and is currently Chairman of The Henry George Foundation of Great Britain.

How our introductory courses work

A tutor presents philosophical ideas, and leads a discussion based on what arises in the group. Being practical rather than academic, the emphasis is on personal knowledge and experience. Students are encouraged neither to accept nor reject the ideas put forward, but to test them in practice for themselves, in the light of their own experience.

Enrol On Next Course
Check Our Reviews

Following all COVID-19 guidelines for your complete peace of mind.

Courses in practical wisdom for everyday living. Meet with like minded individuals.

This popular course is practical rather than academic and draws on sources of wisdom from East and West, past and present.

What some of our students say...

“Absolutely loving the course!! …Really changing how I think about things and life in general.”

“...I am benefiting greatly from the content and the practical nature of it. Thank you, it is enriching my life.”

"Lovely people with a strong sense of why learning is valuable at any stage in life."

"I started off with the Introduction to Practical Philosophy during the first lockdown and can honestly say it was a lifesaver."

"Have thoroughly enjoyed the introductory course and the daily awareness exercise practice. "

Previous
Next
“I feel more relaxed...”

“The daily awareness exercises … have changed my thinking and I feel more relaxed about situations in the media and other aspects of my daily life.”

"The knowledge and experience that I have gained from the philosophy classes has helped me to discover more about myself and better prepare for dealing with life's daily surprises and challenges."

The introductory courses have limited spaces and can get fully booked up in advance, so to save disappointment it is advisable to reserve your place on the next course well in advance.

Some of the themes included in the introductory course: